By CLAIR ENLOW
Special to the Journal

East of Interstate 5 on Capitol Hill, Pike and Pine streets are so cool the neighborhood is named after them. Retail and nightlife thrive along both streets.

But the blocks between I-5 and First Avenue are sometimes lonely or just scary. Almost all the storefronts are dark after 9 p.m. The paving is inconsistent, ranging from artful (around Westlake) to patchy and decrepit. Lighting is spotty at best.

That will change, beginning in 2020, with a $20 million redo by the city of Seattle in partnership with Downtown Seattle Association. Pike Pine Renaissance: Act One was rolled out this month in a special open house.

The slate of revisions includes paving, lighting and plantings. Traffic lanes will get slimmer and streets will become lush conduits for people.

Along with all the new buildings and new residents downtown, the project is designed to give the streets some needed direction. It will provide care and feeding for retail businesses that make it through the changes.

It's a little different in every block. At best, it will provide added, round-the-clock safety and encourage retail diversity. At worst, it will look like an outdoor mall running through the city.

What's in the street 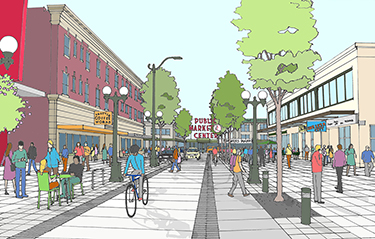 Images By ZGF Architects LLP [enlarge]
Pike and Pine will go curbless between First Avenue and Second Avenue, with a “shared street” design. Paving will stretch from storefront to storefront, and cars will drive on the same level as pedestrians. 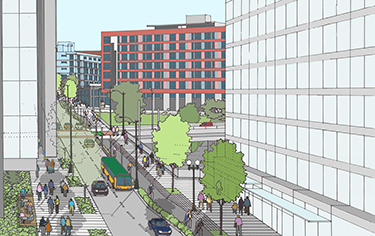 [enlarge]
The Pike Pine Renaissance will help people cross over I-5. 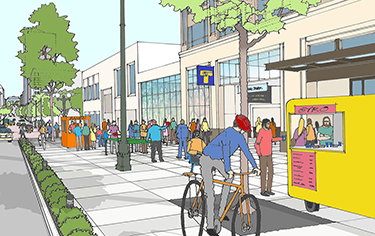 [enlarge]
Blocks like Pine Street between Third and Fourth will get special treatment. Westlake Station will open onto a small plaza.

Over all, the changes on Pike and Pine should make them better at moving people around. There will be a consistent vocabulary of public features. But they are complex. In plan, they look a little like a circuit board, with a shifting pattern of lanes for cars, buses, and bike lanes.

Uneven and narrow sidewalks will be widened, as much as 10 feet in places. The plan also narrows crossings, a change intended to make pedestrians feel safer and more important in the scheme of things.

None of these elements are novel. Consistent, high-quality paving will go a long way toward increasing the flow of pedestrians and feeding small businesses. The most important is cohesive paving and easily readable crosswalks. Planters will be crowned with new trees. Strong, consistent lighting will signal care and attention for the streets after dark, and make them much easier to negotiate.

What about cars, you say? It should surprise no one that the public right-of-way does not get any wider. The hand that gives to pedestrians must take something away. On the Pike and Pine corridors this means that Pike Street and Pine Street will become a one-way couplet.

Instead of two traffic lanes each way on each street (for a total of four lanes on each), there will be two lanes going the same way on each. They will become like many of the other one-way streets in downtown Seattle — but with fewer lanes and more space for bicycles.

Planners say traffic volumes on Pike and Pine are much lower than on north-south streets downtown, and two lanes are sufficient — with some additional turn lanes at key locations. A single lane will accommodate traffic between First and Second avenues, where cars will be literally raised to the level of pedestrians.

There are plenty of good reasons to do this. Construction has been overshadowing and blocking downtown streets for years, but the sidewalks are still an uneven patchwork that makes you wonder where you are — and where the city's role comes in.

In the meantime, the Seattle Department of Transportation priorities have been surely and steadily shifting from accommodating cars to pleasing pedestrians. It's about time.

No two streets can fix our patchwork of downtown sidewalks. But Pike and Pine are special. They stretch unbroken all the way from Capitol Hill to Pike Place Market, past the planned addition to the Washington State Convention Center. Fixing them will be transformative.

Lot's of cities — including Seattle — are sorry about bringing highways through the center, but as far as I know none have ever regretted treating pedestrians and bicyclists better.

The design consultant for Pike Pine Renaissance: Act One is ZGF Architects. GGN provided design at the earliest phase.

The city's Office of the Waterfront is continuing the project in coordination with other city planning and design efforts for the streets of downtown Seattle, including the City Center Connector (the streetcar on First Avenue), One Center City (an urban design plan for streets) and Third Avenue Transit Corridor Improvements.

The city is accepting comments on Pike Pine Renaissance: Act One through Tuesday, Oct. 24 at an online open house https://waterfrontseattle.org/pike-pine.

Clair Enlow can be reached by e-mail at clair@clairenlow.com.