Get ready for a month-long closure of Montlake Bridge 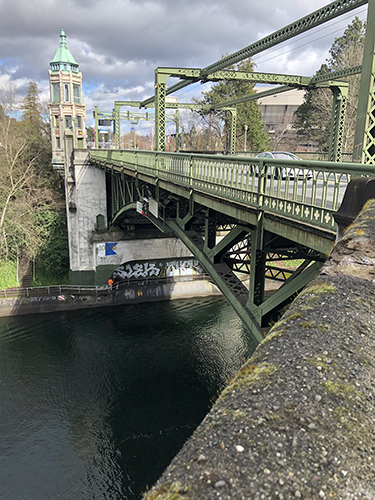 WSDOT photos/flickr [enlarge]
About 60,000 vehicles use the bridge each day. 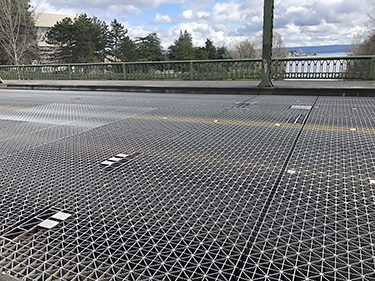 [enlarge]
Crews have welded parts of the metal deck panels to fill in holes. WSDOT says the repairs have become more frequent.

Driving around Husky Stadium will get a lot more tricky beginning Monday, as the Washington State Department of Transportation will close Montlake Bridge for nearly a month so crews can conduct $7.38 million in repairs.

The first phase of the work will replace the metal grid deck and two expansion joints on the 96-year-old bridge. WSDOT has been patching holes in the bridge's 23-year-old deck as a temporary fix. Last year, crews welded nine patches on the steel deck and another five have been added so far this year.

The deck is made up of 84 metal panels, which are all being replaced. Crews will add six lines of support beams below the panels to reduce strain on them.

The bridge's first metal deck was installed in 1946. Prior to that, the deck was made of timber with timber sidewalks and curbs.

WSDOT anticipates reopening the bridge to traffic on Sept. 3. Sidewalks will remain open to pedestrians and bicyclists during phase one.

The second phase requires raising the bridge so that crews can replace mechanical parts. This will result in total bridge closures over four weekends: Sept. 11-12, Oct. 9-10, Oct. 23-24 and Oct. 30-31.

WSDOT earlier this year awarded a $3.95 million contract to Hamilton Construction Co. of Springfield, Oregon, for the work. Preexisting funds are covering the cost.

According to DJC records, there were four bidders for the job. Others were Walsh Group ($4.08 million), Imco General Construction ($5.26 million) and Graham Contracting ($5.79 million). WSDOT records indicate both Imco's and Graham's bids were rejected. The engineer's estimate was $4.8 million.

Hamilton also was the general contractor for a $13 million trunnion replacement job last fall on the Interstate 5 bridge crossing the Columbia River.

WSDOT notes that the last major rehab of Montlake Bridge was 23 years ago. The bridge carries about 60,000 vehicles a day on state Route 513.