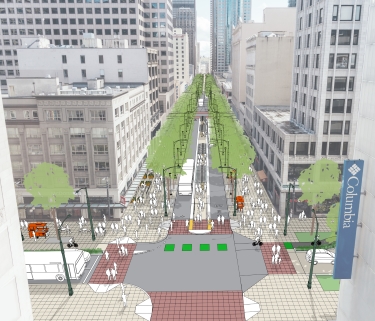 Images provided by ZGF Architects [enlarge]
A curbed median with bus stops would allow boarding on either side of the vehicle. The view looks south at Third and Pine.

Third Avenue is now all buses, all the time.

King County Metro planners picked the street way back in the 1980s because it runs north and south through the geographic center of downtown Seattle. Our bus system is still the lifeblood of public transportation. But now that Seattle's “bus tunnel,” built in 1990, is dedicated to the expanding light rail system, Third Avenue carries even more buses. They move slower than they did in the tunnel, but bus drivers enjoy priority right-of-way, and riders enjoy the choice of routes they get with the bus-dedicated street.

All the same, some planners say it's just too many buses for one street, and there is not enough room on existing sidewalks for the lifeblood of the city — pedestrians.

You don't have to be a planner to know that people walking north or south through downtown Seattle avoid Third Avenue. It's not just the hours when there's a clattering rush of curb-to-curb buses, with some empty as they begin or end their routes.

It's the sidewalks. They're difficult and messy compared with other downtown streets. Sometimes, there seems to be just enough room on them for bus stops and riders — who tend to occupy the curb side — and also for the loiterers who tend to pack in along the storefronts. There's litter and noise, some panhandling and occasional bad behavior. Bus passengers don't like it. Retailers hire extra security and complain. Nobody's happy. And nothing has changed much in decades, except the added buses.

FACE IT AND CLEAN IT UP

But there's another group unhappy about Third Avenue — downtown developers building tall, mixed-use towers and planning even more. They want to fill those towers with well-heeled residents who are happy living downtown and tell their friends. The Downtown Seattle Association wants those developers to put front doors on Third Avenue, and it wants new residents to go to the stores there. That's not likely unless something changes. 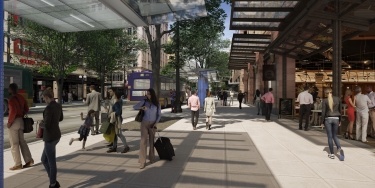 [enlarge]
Eliminating a lane of traffic would make room to widen the sidewalks, creating space for pedestrians or sidewalk cafes.

But what, and how? A new “vision plan” at https://tinyurl.com/y2lhw4b2 by the DSA (in partnership with the city of Seattle and King County Metro) brings a fresh analysis to Third Avenue woes, and new hope for downtown residents — even the ones who don't depend on buses for transportation.

The most basic finding is not surprising. In the long term, sidewalks must be permanently widened and beautified. The corollary is that at least one traffic lane in the right-of-way must go, and that means some bus routes will move to other streets.

Just as with most urban issues, there is no single solution. Not surprisingly, the fixes proposed in the DSA plan include more cleaning, homeless outreach, policing and programming. But they also include retail and food businesses that don't depend on swinging doors and security guards — like takeout windows — and ones that stay open past five o'clock. But the city has a part to play, too, even before widening the sidewalk: Fill the holes in the concrete. Oh, and get rid of some of the clutter, like “dysfunctional” street lamps and old phone booths. All this could happen pretty quickly.

And where do those bus routes go to make space on Third Avenue? That's an open question, but the report suggests that the most likely answer is that they go to nearby, parallel streets, where buses already run.

LOOKING TO OTHER CITIES

To their credit, the authors of the study, which include ZGF Architects, Fehr & Peers Transportation Consultants and ELS Architecture and Urban Design, turned to other cities — notably Portland, Denver, Minneapolis and Vancouver — for examples of how to mix lots of bus stops and bus traffic with an attractive pedestrian environment. What they found is transit malls — extra wide streets where buses clearly belong and pedestrians that are also bus passengers can find services and conveniences.

But just like mature and maturing cities everywhere, Seattle has no room for redevelopment at that scale within its street grid, and little appetite for the kind of outsize investment it would take.

Could we have a bus mall lite? Well, yes. One of the four alternatives for the future of Third Avenue included in the report has buses stopping and opening along a new curbed median, similar to the ones along the streetcar route from Pioneer Square to Capitol Hill. This requires considerable commitment from the city as well as investment from Metro, including buses with doors on both sides. But commitment to median boarding on just one downtown street seems unlikely. None of the sponsoring agencies will admit to any preferences among the alternatives laid out in the DSA report, but it seems obvious that Seattle must retain some flexibility as the area continues to build out its light rail system.

Metro anticipates some reduction in bus commuting and ridership as that happens, beginning with the opening of the Northgate Link Extension in 2021. Rerouting may also yield some efficiencies, with the result that buses are fuller — downtown and elsewhere — as well as faster and more reliable along some routes. It's difficult to anticipate long-term changes in demand, according to Bill Bryant, Metro's managing director of service development.

Changes in the fleet are being made according to schedule anyway, said Metro spokesman Jeff Switzer. Nine of the 42 routes now running on Third are zero-emissions electric trolleys, and Metro is committed to converting all of its diesel bus operations to electric (primarily battery-powered) by 2040.

(Editor's note: The story has been changed to reflect the number of routes running on Third.)

And in the meantime, the city of Seattle's One Center City plan has brought some love — and $30 million in public funding, too — to city streets. But Third Avenue is special, and the DSA's entry into the mounting stack of fixes for transit there should be encouraging to everyone who's on foot downtown, now and in the future.

You can email comments to editor@djc.com.