By SAM BENNETT
Special to the Journal 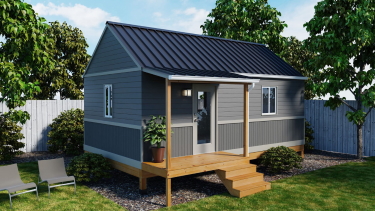 Images courtesy of MyKabin [enlarge]
MyKabins are built on above-ground foundations, which avoids having to operate heavy equipment in a homeowner’s backyard. 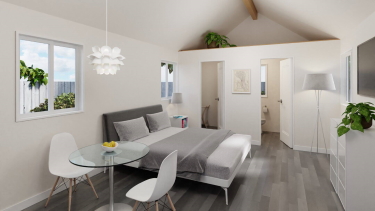 Also known as detached accessory dwelling units, cottages can provide owners with passive income from renters or at the very least, a comfortable, stand-alone temporary home for relatives and other visitors.

In the last decade, King County cities such as Seattle have eased accessory dwelling unit laws as a way to tackle the region's tight housing market.

But even with more accommodative regulations for attached and detached accessory dwelling units, homeowners who want to add the units have traditionally faced the challenging role of acting as developers on their own properties.

Local entrepreneurs Tom Todaro and Clint Jones worked for several years on a fix for the problem of how to make detached accessory dwelling units (known as DADUs) simpler for homeowners to build and get permitted.

Their solution, a Bellevue company called MyKabin, takes some of the headaches out of the process. Todaro said he and Jones spent almost a year working with the city of Seattle, engineering every aspect of the DADU design, from the foundation to the roof. MyKabin, Todaro said, offers an easy, hassle-free, turnkey option for building a backyard cottage at an affordable price.

The cabins range in size from 250 to 1,000 square feet, and cost between $110,000 and $200,000 — including water, sewer and electrical hook-ups. MyKabin also handles permitting and facilitates the inspection process.

The on-site time needed for construction is about four to six weeks.

“The approximately 400-square-foot cabins seem to be most popular right now,” Todaro said. “We have several two-story models. The first is in permitting and should be complete in the spring.”

To make the cabins environmentally friendly, the company came up with an above-ground foundation design called Karry Beam.

“Karry Beam is basically the only system designed to be built with the foundation above ground,” Todaro said. “This is very helpful in avoiding large machinery (working) in people's backyards. It is less expensive and much more environmentally friendly.”

MyKabins don't require the usual heavy equipment that comes with building a home. Todaro said every piece of a MyKabin was designed to weigh less than 500 pounds, so if there is no heavy machinery access crews can assemble the entire unit by hand.

“Obviously, if there is good alley access,” he said, “it makes our life a little easier.”

Having fewer heavy machines on-site is one environmentally friendly aspect of MyKabin, but Todaro said the cabins are also designed to meet eco-friendly standards in terms of energy savings.

“We started with the environment in mind, so most of what we do is environmentally friendly,” he said. “Above-ground foundations allow for no decrease in permeable land. The wall, floor and ceiling are built with materials that allow an incredibly tight envelope, so almost no energy is needed for heating and cooling.”

Locally sourced green building products are used for the floors and the roof structure has a solid core of graphite polystyrene insulation.

While assembly can be quick, Todaro said city permitting can't be rushed.

“Permitting still takes three to four months in the city of Seattle," he said."You need the same permit for our little cottages as you do for a full new home. That makes permitting hard for everyone. The city is following its mandate and is great to work with. It's just a big challenge and time delay for everyone who wants a DADU.”

Todaro said the cottages are permitted in many local cities, including Tacoma, Shoreline, Kirkland, Everett and SeaTac. “They are permitted basically everywhere in King County, except Bellevue,” he said.

Todaro said MyKabin could construct and install “a couple hundred cabins in the next few years.”

Eight MyKabin cottages are complete or in construction, and more than a dozen are in stages of permitting.